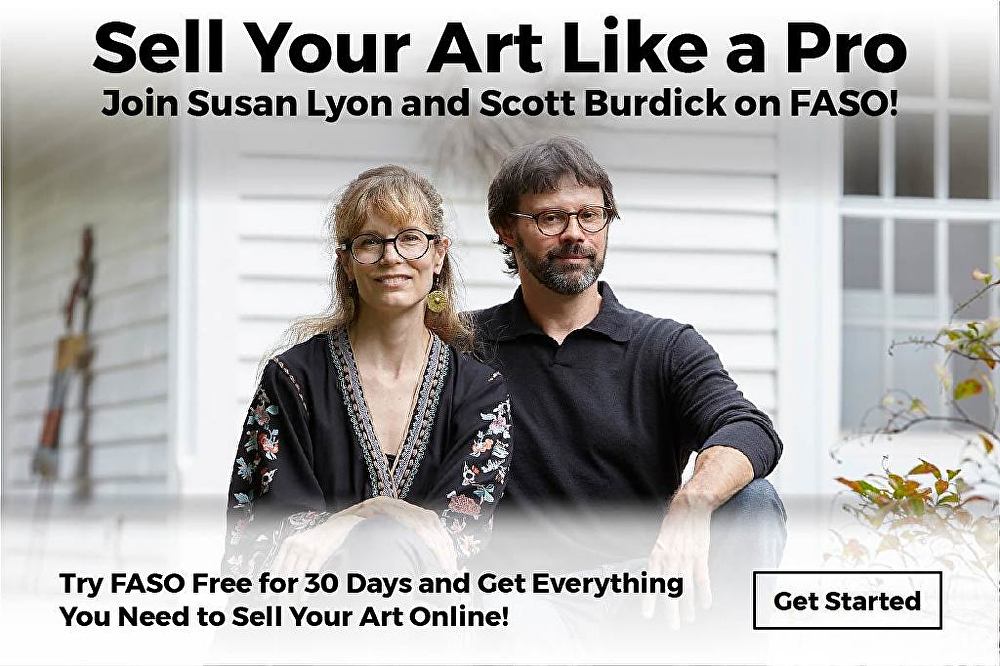 A popular 1970's book, Jonathan Livingston Seagull, by Richard Bach, told a short story about a extraordinary seagull who broke away from the crowd by soaring higher and diving faster than all the other seagulls. While in Acadia Nation Park this month, I think I must have happened upon Jonathan L. Seagull's great grandchild. As I observed this Acadian gull, day after day, it occurred to me that this bird is truly a marketing genius. [...]

Your artwork has a unique ability to communicate and speak to others. But there are times when you need to discuss your art. Remember, conversations are so important when connecting with your collectors. You cannot rely on your art to do all of the communicating. You must learn to use the written and spoken word. For some, this gift comes naturally. For others it is easier said than done. [...]

Improve Your Artwork With A Double Dog Dare

Step out of your comfort zone. Step out of that box that is holding you in. Jump in front of that train! Your artwork may fail. But it may succeed. Either way, though, you will have learned something and will be a better artist for it. I challenge you to try it – no, I dare you to try it! I once read something from a very accomplished and successful artist who "dared himself" to do a painting. Who can turn down a dare - especially a double-dog-dare?! (Editor's Note: We may create a slight breach of etiquette here, but we suggest perhaps you consider challenging yourself with the sinister Triple-Dog-Dare). [...]

The Secret to Success is to Own a Primary Focus The fact remains that we artists only have so much time in a day or week or year. Focus and excellence in one activity leads to success – I know that all too well, and yet I am so flattered by new opportunities. Additionally, I need to consider how I'll make a living at whatever I choose to do as my primary work. [...]

I sometimes wonder: What would great master artists of old have thought of today’s technology and how it’s impacted the craft that we share along with them; How would this technology have affected them and their ability to market the great masterpieces that they created, and connect with like-minded artists of their day; and would more secondary artists have advanced further in their skill if they’d had had opportunity to chat with the likes of Michael Angelo via facebook? [...]

The caveat: your business is perfect in its ability to bring you the success that you now enjoy. For some of you this may be a compliment. If you are happy with where you are, continue to do those things. They are working. You have perfect success. For those of you who are not satisfied with your current level of success and wish to see your career grow, this is a wake-up call. I include myself among you. I too wish to attain a higher level of success. [...]

If we artists remember that we’re in a partnership with our galleries, and if that partnership is built upon mutual trust, there’s no good reason why gallery owners should avoid giving us the names and contact information of those who collect our work. [...]

So, a friend of mine finds a strange looking egg while taking one of his daily walks not long ago. After viewing the egg down at his feet - and wondering how it escaped it's nest and landed right in the middle of the trail he frequented - he came to the conclusion that it was an abandoned duck egg; and of course being the animal lover that he is, decided to make an attempt at hatching the egg by placing it in a nest located in one of the many chicken coops that sit on his vast property. [...]

Have you ever had those days where you just can't seem to find the creative urge? I have. Some days I look through my stacks of plein air studies and photos trying to find that spark of inspiration. Often I will waste countless hours. Over the years I have found things that have helped me find my absent muse. For me, the most effective is to go outside and paint on location. But this is not always possible or practical. [...]

Make the Best of Valuable Down-Time

Silly, isn't it, that when we truly have the time to paint, we instead wallow just a little bit in self-pity at our lack of business (or "busy-ness). This frame of mind was first brought to my attention several years ago by a gallery owner. He mentioned that, in fact, most artists do this; when business is down, they fail to take full advantage of the time to both improve their talent and build up a nice inventory for the next busy season [...]

Michael Kimmelman, an influential New York art critic is attributed to have said (as quoted by Jove Wang), "Most artists have one good idea, sometimes two. But in the best of cases, that's enough for a lifetime." Many artists, myself included, shudder at the thought of being stuck in a rut, just rehashing the same thing over and over again. However, recently I have realized that I really could spend a lifetime exploring the few best ideas I have. In my case, it is about the spiritual connection to the landscape. There are enough facets to that idea, that I could never exhaust the possibilities. [...]

I've worked with some of the best gallery dealers and some of the worst, and what I've learned is that artists should never put up with unfair business practices from gallerists. If they're late on payments because of financial hardship, we might encourage them to be transparent with us so that we can work together to get through the difficult time. Everything should be above board. However, many times artists are silent about "slow to pay" or non-payment or even downright lies. In a perfect business partnership, both parties frequently talk and discuss options - nothing is hidden and no one is left wondering what's going on. Transparency creates trust in the long run. [...]

Thoughts on the Unconventional Guide to Art and Money

I don't normally do "reviews" of other products on this blog, partly since many of the other online art sites I might consider reviewing could be seen as somewhat competitive to my own online services and, as such, it would be a bit strange for me to "review" a competitor. But, as this particular resource is basically a book that gives people ideas on marketing art and not an online service, I do feel qualified to share my thoughts on it. After all, I did make my living actually selling art for nearly 16 years. [...] Some people will assume that even a single typo means you "don't care" - which is an extremely faulty assumption on their part. [...]

Today, artist Daniel J. Keys shares his time management routine with us. We sincerely hope you find it useful in considering how you structure your studio time for maximum productivity. [...]

With this post, I begin a series of blog posts on - how to work with galleries, but more specifically, how to negotiate with galleries so that both the artist and the gallery owner are pleased with the arrangements. These posts won't necessarily talk about finding and getting into galleries; rather they'll deal specifically with how to negotiate for what you want and need once you enter into what is called their "stable of artists". [...]

Building Relationships with Your Collectors